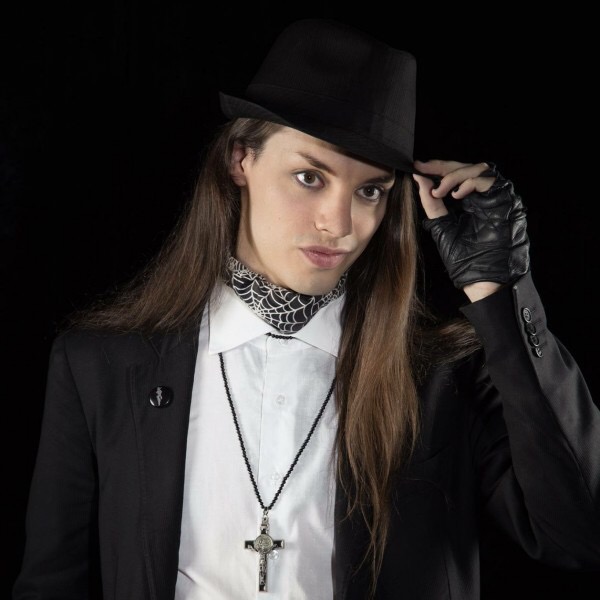 Hey guys! Vampirefreaks.com is shutting down the social network portion only and with that being said every single interview we have ever done is going to be published! We are still doing interviews and are waiting on things being finalized for our officials website! Without further a-do here is the first interview we published on Vampirefreaks on January 18th, 2018. All interviews will be published in order, every 2-3 days so that we can then continue with this years new interviews!

Is there a meaning behind your Dj name?

Well, the "Lord" part of my DJ pseudonym was given to be by some friends because of my manierisms, don't know why exactly. The "Nevermore" part is from me. It's obviously a reference to the poem by Edgar Poe, "The Raven" (quoth the Raven, "Nevermore")... But also, I'm really interested in dandysm, and famous French dandy Barbey d'Aurevilly used to sign up his letters with "Nevermore"... I liked the idea of that, the nostalgy.

How long have you been spinning?

I started about 2003, so it's like, holy shit, 15 years ! But at first it was nothing serious... My first "official" gig was in 2006, it was a vernissage for the new album of Killing Joke... After that, I DJed as much as possible in my country (Switzerland), until I decided to focus more on quality than quantity, and only accept the gigs I really liked, and use that as an excuse to travel around the world and meet cool people from the scene in different countries... That's how we met ! 😉

Neither... Dragons are cool when they blow shit up in Game Of Thrones, but I don't have a big hard on for fantasy creatures... I HATE vampires, for example... The animal that I'm passionate about the most is the Mantis Schrimp.

Do you have a go-to set list? What's the first three on it?

I don't have a go to setlist because I try to play new stuff all the time, and I adapt a lot to the audience's mood. But yeah, I have a few songs I love that I'll play almost all the time... The main one is a song by French band Jad Wio called "Toxic Boy" that I LOVE, and I play that as a kind of private joke (and because Tim Burton's would be pissed if he knew, but that's a story for another day). There is also a song I love to play outside of the French speaking countries called "Vice et Versa" by a band called "Tranxen 200"... And it's fun because the song is really good, but it's actually a parody of the whole New Wave / Neo Romantic scene... The lyrics are utterly stupid, but it's a cool song and it makes me giggle each time I play it.

Has anyone ever requested a song and thrown up on you?

A long time ago I was DJing for a very small deathrock party in a squatt (is this a word in English ?) in a small shitty town in Switzerland... It was a very "punk" party, meaning there was like 10 people, organizers included, way too much beer, and a horrible sound system... I was DJing with 2 Sony Discman, so you get an idea... Anyway, that very grey looking dude came to me to ask for a song, but before he managed to tell me his request, he threw up all over my turntables... Cleaning afterwards wasn't fun ! 😛

What is your favorite cartoon from childhood?

I have to go with the Simpsons, because it's the only cartoon I loved as a child that is still funny and clever to me as an adult 25 years later. It's also quite politically incorrect, but in a very "gentle" way, if it makes any sense. I also love old Tex Avery's cartoons from the 40's and 50's... Actually I'm watching those again these days... This wouldn't air nowadays because it's kind of racist and sexist and everything (hey, it was the 50's)... but I'm amazed at the level of creativity they had.

What kind of music do you spin?

To keep it simple I usually answer "dark and alternative musics", which is a broad term to encompass stuff like goth, neofolk, industrial, etc... In my country, you can't really go niche, if you wanna DJ regularily it's better to be able to do a bit of everything... But what I spin the most is old school post-punk, batcave, deathrock, stuff like that.

People want to know; what do you love about djing? Is it being able to get people to dance? Or watching your superhuman DJ skills? Or did you make a deal with a wizard?

Actually, it's the wizard who wanted to make a deal, but I declined, because my part of the deal was to play Justin Bieber during a deathrock set (man, that wizard was weird !). More seriously, I don't think I have any skills... To be more honnest (and I hope I won't offend anyone), I don't think any goth DJ have any skills... technical skills that is... What they have is passion, knowledge and sensitivity. As for my own motivations, I enjoy the fact that as a DJ I get to be an active part of the night, not just a consumer and spectator. I also enjoy the opportunity it gave me to travel a lot, discover other scenes in other countries (UK, USA, France, Lithuania, Poland, and Israël quite recently)... Oh, and getting wasted for free is kind of a perk as well. 😀

Last question; we'll sort of. Leave us with a quote:

I'd love to go with something funny, but I got nothing right now. So Instead I'm gonna go with my favorite Nietzsche quote, and don't worry it's not that crap about looking into the abyss or whatnot... The quote is (I'm paraphrasing and translating, probably poorly) "The superiority of a human being can be defined by the ammount of uncertainty he's able to tolerate"... When I read that during my studies I was like "Wow, that deserves a pause"... I think it's deep, and it's much needed these days in the current social climate.